For any writer, one of the most enjoyable parts of creating a book—is FINISHING one! No doubt about that. Then, once the book is done, it’s time to hope that people who read the manuscript in advance will actually like it—giving it a literary thumb’s up, which is certainly the best feeling in the world. 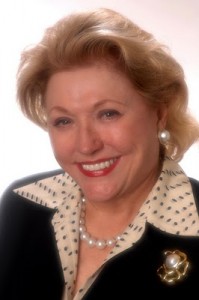 Anyone who has written a book knows, of course, that completing a book is just the start of the work, as mapping out the marketing and advertising campaign is essential to any book’s ultimate success. And one of the necessities of book promotion is procuring advance testimonials from prominent people with the idea that their quotes appear on the back of the book, enticing readers to take a second look and buy it.

With this goal in mind, for the last two months, I’ve been collecting such quotes and have been very lucky that celebrities I’ve interviewed in the past have kindly offered to read Katie Up and Down the Hall and provide their viewpoint on it. 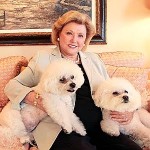 One of my all-time favorite interview subjects is the great novelist Barbara Taylor Bradford, the master storyteller who knows a good plot when she creates one, a true woman of substance.

Her latest novel, Breaking the Rules, is breaking bestseller records, as her novels always do, and it features a mysterious new heroine, along with some of the familiar faces from the dramatic Harte series. But never one to rest on her laurels, Barbara is also hard at work on Playing the Game, a novel to be published in October of this year.

A few weeks ago, after many years of not seeing her, I ran into Barbara at a sparkling reception in her honor hosted by Liz Smith, a party at Michael’s that was a benefit for Liz’s great charity, Literacy Partners, of which Barbara and her husband, film producer Bob Bradford, are both champions and generous contributors. That night, I asked Barbara if she would read my new book and offer a quote. And since she’s on deadline for the new novel before departing for a summer trip to Europe, I would have completely understood if she didn’t have the time to do it.

So you can imagine my pleasure about two weeks later when I came home from dinner and heard this message on my machine: “Hello Glenn, it’s Barbara Taylor Bradford! I just wanted to tell you how much I really loved your book Katie. It was very touching–and I couldn’t put it down. I’d be very happy to give you a quote. Please call me.”

Subsequent to this, we had a long talk about our mutual love of dogs, and the recent sad loss of one of Barbara’s beloved Bijon Frises’s. We shared the depth of sadness that happens when one of our “children” leaves us. It’s a very empty feeling that only a fellow dog lover completely understand.

After finishing talking to Barbara, inspired by what she said, I went back to the interview we did for my book, Turning Point: Pivotal Moments In The Lives Of America’s Celebrities, and it was fascinating to see that the seeds of greatness in Barbara were planted so early.

As she told me: “I sold my first story about Sally and her little pony at age eleven to a magazine for seven-pounds-six. And my destiny was sealed,” she laughed.

She brazenly quite high school at sixteen, bought a trench coat, and joined the typing pool at the Yorkshire Evening Post. Over the years she wrote for magazines and newspapers, dreaming of one day fulfilling her childhood dream of becoming a novelist. Finally, in l976, she hatched the idea about a woman of substance. Within a few hours she had the whole sixty-four year history of Emma Harte’s story in her head. “The whole world loves a survivor, someone who uses adversity to make herself stronger. I put emotion on paper well.” 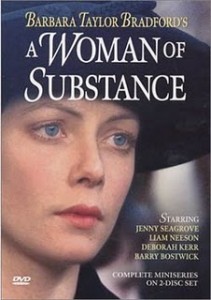 A Woman of Substance

Did she ever. A Woman of Substance was an overnight bestseller, spawning Harte sequels and TV miniseries for each successive book.

“I tell a good story,” she merrily shrugs.

And I can’t thank Barbara enough for what she generously wrote about my story: “I picked up this book to glance through it and suddenly found myself unable to put it down. This warm, touching, tender and loving memoir is probably the best book I’ve ever read about a dog. Glenn pulls you into this moving story instantly. Even people who are not crazy about dogs will love this tale.”

Tagged in: A Woman of Substance, Barbara Taylor Bradford, Breaking the Rules, Glenn Plaskin, Katie Up and Down the Hall, Liz Smith, Turning Point