Everything A Boy (And Dog) Could Ask For–And More 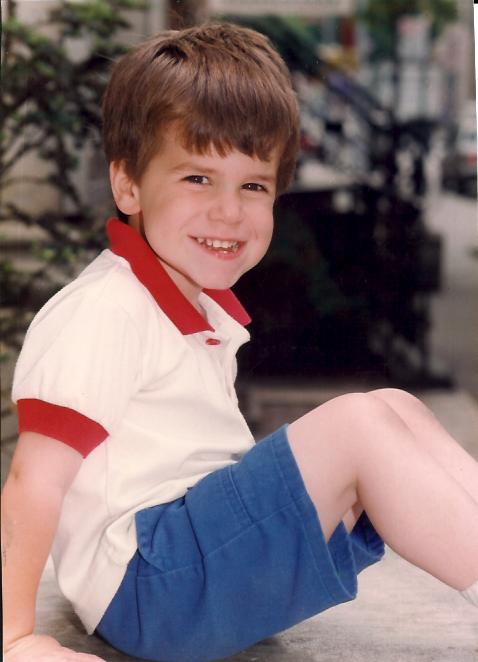 Although my astutely-intelligent cocker spaniel is the star of KATIE UP AND DOWN THE HALL— equally cute (as any dog!) is one of the book’s other main characters—an adorable boy named Ryan. We nicknamed him “The Kid,” and, together with his Dad, John, they were our neighbors down the hall, along with octogenarians Pearl and Arthur.

When I first met Ryan, he was a rambunctious three-year-old, incredibly cute as he whirled around and around with Katie, outfitted in a Mickey Mouse T-shirt, blue corduroy pants, and black-and-white sneakers (with blinking red lights that illuminated when he ran.) He reminded me of Dennis the Menace—a boy filled with high spirits and mischievous plans. 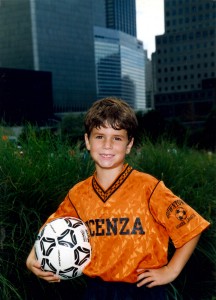 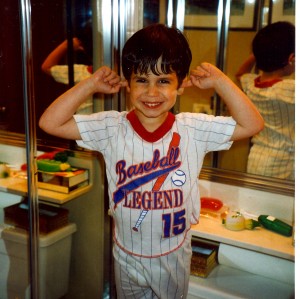 Over the years, Katie and Ryan grew up together—from their puppyish years to adolescence—becoming lifelong friends. 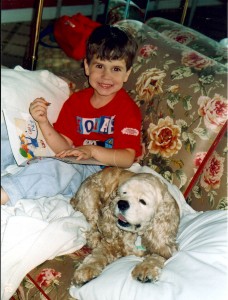 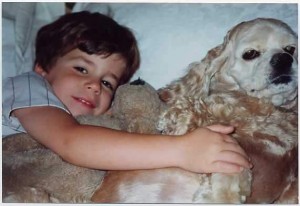 A Boy And A Dog, bonded for life

Ryan furiously raced my dog up and down our 120-foot red-carpeted hallway until they were both breathlessly exhausted. I set them up at an imaginary starting line for hallway races, and Ryan would always attempt to outrun Katie, but she slyly cheated by jumping the line. “Not fair!” Ryan would holler,  both of them lining up again. In quieter moments, Ryan would giggle for hours chasing my dog, cuddling in bed with her, taking bubble baths with her, feeding her bagels and crackers, introducing her to his friends, and, at night, falling peacefully asleep against her, Katie’s paws placed protectively on his chest. 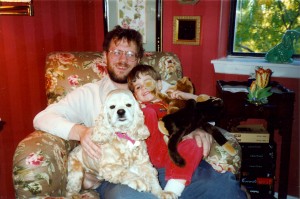 Ryan's Dad John and Katie the first year we met

Ryan’s father, John, a single Dad who worked for a major metropolian newspaper, often needed help babysitting Ryan—and we were only too happy to pitch in. In fact, this little boy became the light of our lives—a surrogate grandson to the matriarch of the family, Pearl, and a little brother to me. He raced in and out of our apartments constantly, dragging along his stuffed animals, games, puzzles, finger paints, Game Boy, and soccer balls. 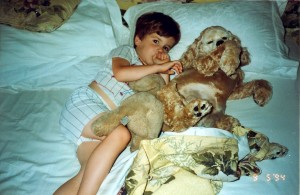 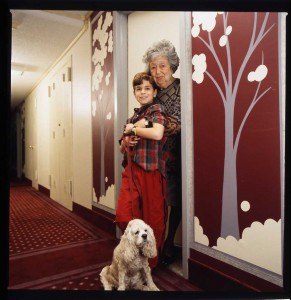 The Famous Hallway shot that appeared in Family Circle magazine

Most poignant to me was watching the evolution of his relationship  to Pearl, who had never been able to have children of her own. So at last, in her 80’s, she had finally found a child who needed her. She whipped up the greatest dinners, spoiling Ryan with her famous chocolate pie. She was Ryan’s grandmother. She truly was. And Ryan, who had no grandmother of his own, reveled in his closeness to Pearl, and would wrap his arms around her, hugging her close. It made me happy to see how much Pearl was reinvigorated by the closeness to Ryan and by her new responsibility.

If you want to read all about Pearl’s relationship to Ryan, and Ryan’s to Katie, don’t miss a chapter in the book titled: “Ready, Set, Go!”  Here’s a little excerpt of it:

“This twosome, seventy-eight years apart, could be heard giggling for hours at Pearl’s dining table as they talked about school and played cards together. “Granny really knows how to play,” Ryan told John, “and she usually beats me.” 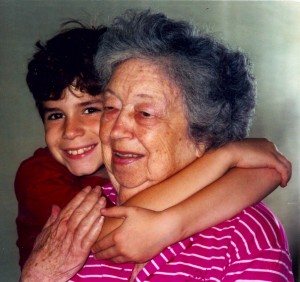 Sometimes I’d find them finger-painting at the table or putting together a model airplane. Ryan was also interested in Pearl’s collection of old vinyl LP’s. “Choose one,” she’d smile, and a few minutes later I’d find them singing and dancing together to Frank Sinatra or Dean Martin, or to the soundtrack of  “My Fair Lady.”

At Halloween, Granny surprised Ryan by wearing a monster mask when he trick-or-treated at her door.

At Thanksgiving, she stuffed him with turkey. 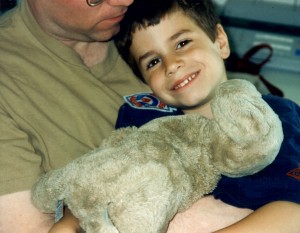 At Chrismas, she reached up to the top of the tree to position the star.

And on his birthday, she helped blow out that last stubborn candle, wiping choclate off his face. 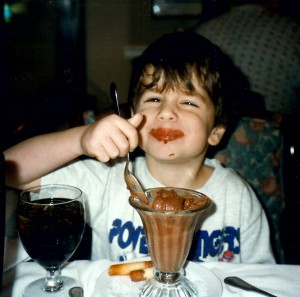 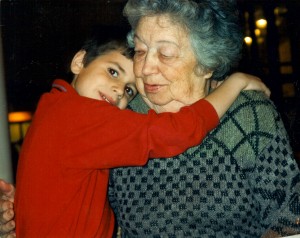 The eternal love of grandmother and grandson

But nothing lasts forever, nothing except the enduring bond of family, that can never be truly broken apart, even by inevitable separations, for the lovely relationship between Katie, Ryan, John, Pearl, and me, is something we’ll never forget. I’ll bring you up to date on Ryan next time!

One Response so far.