When I opened the New York Post this morning, here’s what I found: 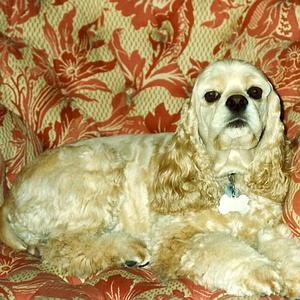 Katie the cocker spaniel, who inspired the memoir “Katie Up and Down the Hall,” was named after Katharine Hepburn, who she met on a visit to the star’s home.

FARRAH Fawcett fawned over her, Bette Midler was bewitched by her — and Leona Helmsley sent a limo to pick her up. Pretty impressive for a bowlegged little bow-wow!

But Katie, the furry subject of celebrity journalist Glenn Plaskin’s “Katie Up and Down the Hall” (Hachette), out this week, was a four-legged force of nature. Her sunny personality united three generations of Battery Park City neighbors — a motherless little boy and elderly couple among them — in the years up to and following 9/11.

Given that it’s a memoir about a dog, one might expect “Katie” to read as the New York version of “Marley & Me,” albeit one filled with celebrity cameos and a Page Six reference.

Katie the cocker spaniel, who inspired the memoir “Katie Up and Down the Hall,” was named after Katharine Hepburn, who she met on a visit to the star’s home.  But this cocker spaniel — though quick to snatch any chicken leg within reach — was no Marley. For one, she was smarter: Not only could she understand some 60 words or phrases, she knew how to rock a runway — Plaskin has the sequined doggie jumpsuits to prove it.

Though she obediently showed off little numbers from Joan Rivers’ line for dogs, Katie wasn’t averse to rolling over afterward and spreading her legs — causing the photographer, as Plaskin writes, to cry, “We’re not that kind of magazine!”

Decades before Leona found Trouble, her bitey little Maltese, Plaskin told the Queen of Mean about his beloved pooch while interviewing her for a story. Intrigued, she ordered her limo driver to fetch Katie posthaste and bring her to Connecticut.

Oddly, the woman Katie was named for seemed unmoved by those liquid brown eyes. During a visit to Katharine Hepburn’s townhouse in 1991, Plaskin told the legend he named his dog for her. “Small compliments,” she scoffed. “A midget me.”

Undeterred, Plaskin continued to take Katie on interviews to Beverly Hills and beyond. To keep her out of a jet’s cargo hold — “I would not check her as a piece of luggage!” — he had a vet vouch for her as a hearing-aid dog.

The ruse worked, and the two were inseparable until eight years ago, when Katie, 15 and frail, finally succumbed.

Plaskin, 58, has since opened his home and heart to another cocker spaniel: 6-month-old ball of fire Lucy, who will join the author Thursday at 7 p.m. at the TriBeCa Barnes & Noble.

Katie the cocker spaniel, who inspired the memoir “Katie Up and Down the Hall,” was named after Katharine Hepburn,
who she met on a visit to the star’s home.

One Response so far.