Puppy Arrested For Horsing Around! 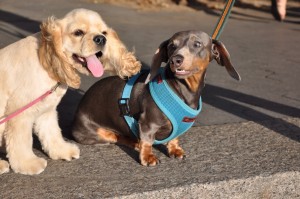 Lucy and Stanley Out For A Walk In Battery Park City

My five-month-old puppy, Lucy, adores her down-the-hall boyfriend Stanley, though she isn’t content just to play with dogs, large or small. She’s branching out! 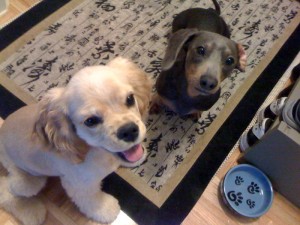 She’s especially fond of a magnificent Belgian Quarter horse named Lee, one of Battery Park City’s police mounts who patrols the Esplanade along the Hudson. Lee’s boss is Sean, the mounted policeman who appears in my upcoming book.

Katie adored Sean and his horse–and would stop in her tracks whenever she heard him coming, as I explain in the book:

Once out on the Esplanade, she walked briskly along the water’s edge, sniffing under every bench, scouting for food, and on hot summer days, searching for the perfect shady spot under an oak tree for a long nap. 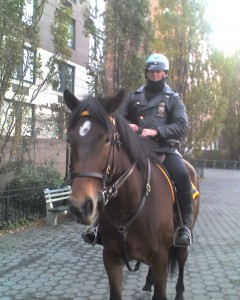 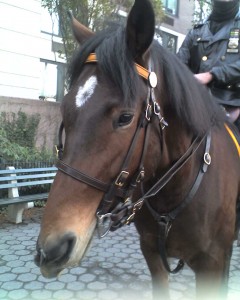 At other times, Katie’s ears pricked up when she heard the sound of hoofs hitting the pavement. That was the signal that our neighborhood’s mounted policeman, Sean, was out on patrol, sitting high up on his magnificent Belgian Quarter horse, Walter.

Walter, Sean told me, had been raised on a farm with dogs, so anytime we passed, the horse would stop and scoop down his head and affectionately rub noses with Katie, his wide nostrils quivering with pleasure.

Katie, in turn, would lick his face. Sometimes, I’d hoist Katie up to him–and she’d playfully swat him in the wide space between his eyes. The picture of this huge horse nuzzling a pint-sized spaniel was endearing beyond belief, heartwarming to all who saw it. Then Walter trotted away in one direction, Katie in the other.

So it’s only fitting that Lucy has inherited Sean’s new mount Lee as her own. A (motion) picture is truly worth a thousand words! Take a look: