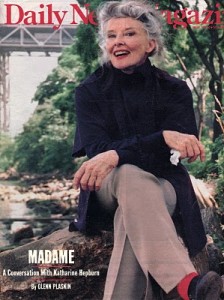 People often ask me: ‘Who was your all-time favorite interview subject?’

Over a period of thirty years, having met or interviewed hundreds of celebrities–legends including Elizabeth Taylor, Audrey Hepburn, Meryl Streep, Jacqueline Onassis, Calvin Klein, Nancy Reagan, Oprah Winfrey, Barbara Walters–all of them unforgettable–one radiant personality stands out in my mind as most magnificent–and intimidating!

And that would be the great Katharine Hepburn, who as a child, I first saw in the movie “Guess Who’s Coming To Dinner?”

Growing up in Buffalo, New York, I never could have guessed that, decades later, I’d be the one invited to dinner at the Miss Hepburn’s East 49th Street Turtle Bay townhouse, discussing, as we did, my biography of the legendary Vladimir Horowitz, which she kindly read, the catalyst for our first meeting.

We instantly clicked and over a period of years, we subsequently did a number of magazine and newspaper interviews, including one titled “I’m Bored With The Great Katharine Hepburn!” for Family Circle; an 80th birthday magazine story about ‘Madame’ for the Daily News Sunday Magazine; another cover piece for the publication of her autobiography titled ME; and an interview for a TV movie she made with Ryan O’Neal called The Man Upstairs. 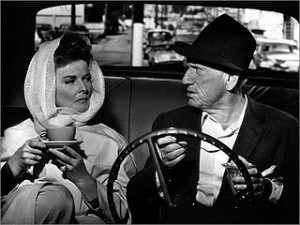 Through it all, in making my appointments to see her, I always got the same phone treatment: “Ham and cheese, 12:30,” Click!

In one interview she compared herself to a baked potato: “A baked potato is fundamental, basic, nothing fancy, rough in a way.” Actually, she was a baked potato upside down, I joked: “Yes, I like standing on my head. I go right up and I’ll stay up for the count of four minutes.” What’s it good for, I inquired? 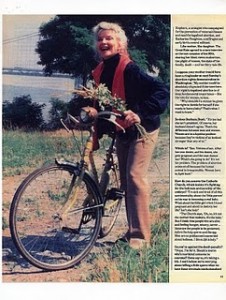 And although the wonderful Katie is no longer with us, I’m so happy to say that she appears in my upcoming book, Katie Up and Down The Hall, in a fun chapter titled: Prancing With The Stars, all about how my dog, Katie, interacted with some of those I’d interviewed, including Leona Helmsley, Farrah Fawcett, Peter Jennings, Bette Midler, Ivana Trump–and yes, even Miss Hepburn. I won’t give away what happened–until September. 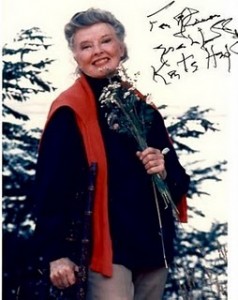 However, I would like to tell you my Kate Hepburn “pan story,” one that illustrated the strong-minded character of another great figure in my life–the tart heroine of my book, Pearl, the octogenarian down the hall who gave me and my dog a home, a warm harbor, sixteen years of wonderful meals, a sympathetic ear, and a lifetime of companionship that I will never forget.

One day, when I was going over to Miss Hepburn’s house for lunch, “Granny,” as we nicknamed Pearl, baked up one of her apricot pear tarts. “She’ll like this,” Pearl confidently surmised, “so give it to her, but remember, bring back my pan. It was my mother’s.”

At lunch, Miss Hepburn did indeed love the tart, and gobbled it up. I left the lunch, returned home and told Pearl what a hit the tart had been. 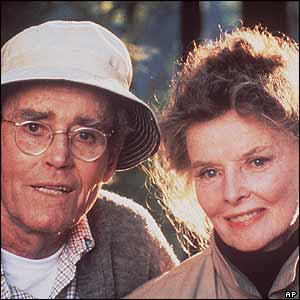 I called Miss Hepburn on the phone the next day and reminded her of the tart–“Oh yes, fascinating, thank you”–and told her that I needed the pan back for my friend.

“You’re calling me for a pan?” her quavery voice challenged.

“You can come over right now and I’ll GIVE it to you!” And off I went to her house. She practically threw the pan at me–but then invited me in for some freshly home-made borscht.

Pearl got her pan–and all was well.

A few years later, on what turned out to be my last visit with Miss Hepburn, I can never forget what happened as I was leaving her townhouse after lunch, illustrating the chin-in-the-air charm and playfulness of the great Kate. As she walked me outside, ignoring a number of curious onlookers who stole a glimpse at this legendary actress, she looked up at me, seeming to study my face, and then said: “You know, you look better than you used to.”

“Miss Hepburn!” I laughed. “Is that a compliment?”

“You can take it any way you want.”

And off she went. And that was the last time I ever saw Miss Hepburn.

She eventually moved to her family home in Connecticut, gave fewer interviews, stopped appearing in movies, and, sadly, her health failed. But I will never forget this legend who had meant so much to me–and, of course, her first name had a special significance, as I named Katie after her.